The Young Woman Competition aims to find a young woman, between the ages of 18 and 25, to represent her local community and speak out on local issues. It provides young women with so many opportunities. If you enter this competition, you will be giving back to your community as well as meeting other like minded young women along the way. The competition has been running since 1962 and has kept the same judging criteria since then as the quality of girls that come through the competition is still high and the standards have not needed to change.

The Sydney Royal Young Woman acts as an ambassador for rural NSW with her role involving many official and informal duties both at the Sydney Royal Easter Show and during her travels within NSW and overseas. 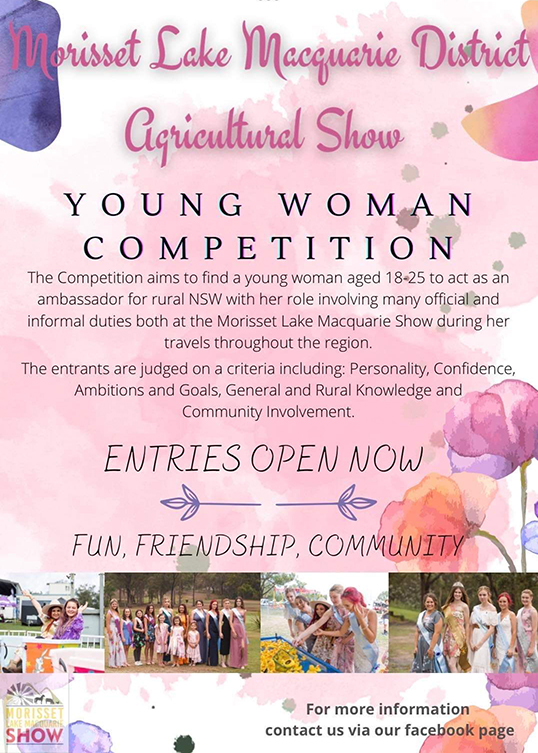 The Morisset Lake Macquarie Young Woman winner will compete in the Group 3, Hunter River Zone (comprising Bulahdelah, Cessnock, Dungog, Gosford, Gresford, Maitland, Merriwa, Morisset, Muswellbrook, Newcastle, Singleton, Stroud). The winner of Zone goes on to compete at Sydney.
The Competition is open to those who are permanent residents of Australia.
1. Entrants must be women aged from 18 years to under 25 years as at 1 May in the year of the State Final.
2. Entrants must reside, be educated, or work within New South Wales for at least three months prior to their local Young Woman Competition to qualify to compete within the State.
3. Only candidates nominated by an Agricultural Show Society are eligible for Zone and State Final judging.
4. Previous entrants in the Young Woman Competition are eligible to enter however they are not to have been one of the 1st, 2nd or 3rd placegetters in a previous State Final.
5. The following people are not eligible to enter the Young Woman Competition:
i. Staff, Delegates and Councillors of both the Royal Agricultural Society of NSW (RAS) and Agricultural Societies Council of NSW (ASC).
ii. The daughters of the Staff, Delegates and Councillors of the RAS.
6. Winning entrants who are employed or engaged in full time studies will be required to obtain a leave of absence to attend Zone and State Final Judging.
7. Where possible, it is preferred that a Young Woman entrant and Rural Achiever nomination is not represented in both competitions during the same year. This will only affect the Young Woman Competition should the entrant be successful in reaching the State Final and subsequently if the Rural Achiever candidate becomes one of the eight Finalists. A winner in both competitions is unable to represent both Young Woman and Rural Achievers at the Sydney Royal Easter Show as the competitions are run consecutively.
8. The winning Young Woman is requested, where possible, to represent the RAS, ASC and their local Show Society at agricultural shows.
9. The State Final Judging will take place in Sydney from (tba) and conclude with the State Final Presentation on tba). Finalists will be guests of the RAS whilst in Sydney, but will be required to pay their own travelling expenses to and from Sydney.
10. The winner of the State Final and 2nd Placegetter will be asked to remain in Sydney as guests of the RAS until (tba). Other finalists may leave Sydney on the evening following the ASC Reception (All Finalists must attend the ASC Reception – date to be advised).
11. All entrants are to abide by the Young Womans Code of Conduct, as set out by the RAS and the ASC, when acting as an ambassador for RAS, ASC or their local Show Society.

The Morisset  Young Woman winner will compete in the zone competition and the winner of the zone will compete in Sydney at the Royal Easter Show.
The contestants are judged on personality, confidence, ambition and life goals, general knowledge, rural knowledge, presentation and speech. Finalists are also asked to demonstrate knowledge of their local community and current affairs and apart from their potential ambassadorial qualities, contestants are also judged on their involvement in and experience of rural affairs.

All local girls, between the ages of 18 and 25 are encouraged to apply. Being a Young Woman means being involved in our local community and the Dungog Show; presenting prizes, sashing winning livestock, speaking with media and generally being in the public eye. The announcement of the winner of the Morisset Lake Macquarie  Young Woman is a major attraction to our Show.

Please register your interest with Kerrin Rumore who will guide you through the steps.